skip to main | skip to sidebar

LESSONS FROM the WELSH REVIVAL 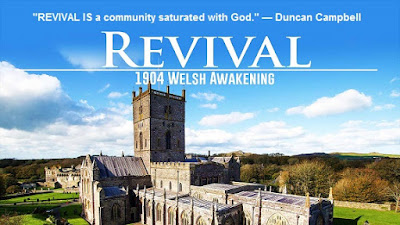 "REVIVAL IS a community saturated with God," said Duncan Campbell. And so it was in Wales. Reports speak of "an overwhelming sense of God's presence and holiness at homes, at work, in shops," even in the pubs!

Powerful conviction of sin follows. "Many lay flat on the ground in an agony of conviction." Some people "fell in a heap and cried out pitifully and loudly for mercy."

Conviction triggers off intense prayer and repentance towards God, but also confession and restitution towards man: "The most remarkable confessions of sin, confessions that must be costly," church members and officers publicly confessing hidden sin in their hearts. This results in long-standing debts being paid, stolen goods returned, church and family feuds healed and enemies reconciled.

Once sin has been dealt with, the presence of God releases "an overwhelming outburst of praise." A meeting "continued for eight hours with scenes of wild jubilation."

Worship, praise, prayer, Bible reading, witnessing - these become the Christian's whole life. Meetings couldn't be closed and went on all night. Men came in their work clothes with their next day's lunch packed. Prayer meetings were held in mines, trams and businesses. Shops sold out of Bibles.

So the nation is changed. Its values become Christian. In some Welsh districts drunkenness halved, pubs went bankrupt, police had nothing to do, magistrates had no cases to try.

And because "righteousness exalteth a nation," prosperity often follows, not least because of honesty in business and work done "as unto the Lord." Strikes were settled. In one, the now-converted trouble-maker asked if he could go back to work. Managers reported their men both better workers and more regular attenders.

Working people took their aged parents home from the workhouse. But do Revivals last? Dr. Edwin Orr says the Welsh Revival was maintained until 1914 and its converts were "The choicest segment of church life, even in the 1930s."

Who wouldn't want this? A tenth of the population newly converted and still going strong 25 years on!

Churches crammed to capacity! Crime greatly diminished! Social problems solved! What Christian would dare to criticise such a wonderful work of God?

Many! A feature of all Revivals is strong criticism from leading Christians...

Apostolic Articles for Kingdom Living is birthed from the vision of a true apostolic church that God has given Abraham Israel to establish, called Household of Faith Church and World Outreach. This group will focus mainly on apostolic teaching that will empower and equip the saints to reach their full potential in Christ Jesus. Our vision statement is to: Bless the city, Reach the nation, Arise and shine to the nations! Our goal is the edification, evangelism and empowerment of the last day Church the Lord Jesus Christ is raising up, before His triumphant return! Please feel free to email Abraham if you have any questions or comments! Also, please email with any prayer request you may have to,

Testimonies of Great Men of Faith